Today the Capital?s afternoon newspaper by the India Today
Group featured an amazing article on Gita Ramesh, Managing Director of the
Kairali Ayurvedic Health Resorts Chain. The feature article states that Gita
Ramesh was a biochemist who wanted to spread Ayurveda throughout the globe ,
but she did it differently with spas that offered curative treatments based on
Ayurveda.

TODAY, launched on April 29, 2002, is the India Today?s
venture into the newspaper market. It has a punchy news format and is designed to relax and recharge its readers
from the afternoon snooze attack. Interestingly written, visually appealing and
almost all-colour, this 16-page afternoon tabloid is published Monday to
Friday.

The biochemist who
wanted to spread Ayurveda throughout the globe , but she did it differently
with spas that offered curative treatments based on Ayurveda.

It was the desire to have an international presence that egged Gita
Ramesh to give up the secure environment of Kerala and shift to Delhi in 1989.
?We knew just one person here and we asked him
look for a house for us and just shifted,? says the 50 year old managing
director of the Kairali Ayurvedic Health Resorts chain. That May, the first
centre opened in Delhi- now there are two.
With five other centers in India and one in Sharjah, Ramesh has eight
spas. Three more will open in Bahrain, Dubai and Abu Dabi this year. The aim:
?to have 50 spas by next year.?

Born and brought up in Mumbai,
marriage took Ramesh to Kerala. ?my husband?s family has been practising
Ayurveda for three generations and I joined in (they manufacture medicines
under Spa Labs)?. But Ramesh wanted to take it global and zeroed in on Delhi.

While capital to start out was not an issue, awareness was. ?We had to
tell people of our services and what all Ayurveda can do. We spent a lot on
advertising,? says Ramesh. But soon,
word-of-mouth testimonials established Kairali.

While the Delhi centers offer massages and curative treatments, the
resort in Kairali offers longer packages. There are cures for arthritis,
spondylitis, and also massages to relax. ?However?, warns Ramesh, ?do not go to
just any centre promising Ayurvedic massages because many of these fly-by-night
places are not based on Ayurveda. A bad massage and poor quality oil can cause
harm.? While the Kerala government has started rating spas, there is no such
thing in Delhi. Ramesh advises that one should check the authencity of the
place(who?s running it, how old it is, where are their products from).

Personally, she likes Dhara (the massage where oil is poured on the
forehead for an hour) and Abhyabgam ( a relaxing 45-minute massage). ?Massages
become curative depending on the oil used, which depends on your problem?

Ramesh?s motto- ?Always do everything seriously and do it the best?-
has stood her in good stead. On the personal front she always balanced work and
home easily. Even though she is travelling extensively scouting for new
locations, stress is not an issue.

What else did you expect? If the owner of a spa looked stressed you
would begin to doubt the science, now wouldn?t you. 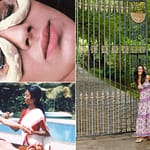 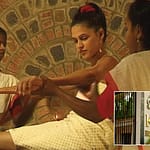