First City the No.1 lifestyle magazine of Delhi published a
very informative and nice article about Kairali Ayurvedic Health Centre near
Anheria Modh , Delhi. The article maps the journey of K.V. Ramesh and Geeta
Ramesh on how they came from a traditional Ayurvedic family ofKerala and set
up an amazing and very successful ayurvedic health center in Delhi in a matter
of just few years. The article also highlights the benefits of the ayurvedic oil massages in day to day
life.

The Kairali Ayurvedic
Centre is an unexpected sight around dusty corner near Andheria Modh, Vasant
Kunj- built in the traditional Kerala style, completely ethnic, with spacious
uncluttered interiors and a beautiful landscaped garden.

Stared by husband wife
team of K.V Ramesh and Geeta Ramesh , who arrived in Delhi about three years
ago , this centre is relatively new. Their earlier centre was in Saket but it
proved inadequate as their clientele grew. They were ?-lucky to acquire a 2000-
acre plot and constructed a centre in the Laurie Baker style, using natural
materials as far as possible, ?? says Geeta. She explains that Ramesh?s family
has been involved with ayurvedic treatment for generations in addition to
manufacturing ayurvedic medicine, his father being responsible for creating the medicine Lipidex. They decided to open a treatment centre in
Delhi because ??many north Indians had to spend time and money to come to
Kerala for massage treatment. Now they can benefit from the 5000 year old
tradition at a much lower cost??, explains Geeta.

Apart from the
programme for general good health and toing, Kairali offers special massages
for treating ailments such as rheumatism, arthritis, lumbago, hypertension,
spondylitis and slipped disc (using the and Pzhichil massages).
Paralysis, migraine, nervous debility, sinusitis and chronic colds are treated
by the Navarkizhi and Dhara treatments. Pinpointing the benefit of massage for
women , Geeta remarks, ??Medicated oils and skilled massages tone the body , resulting
in a smoother blood flow which cures many skin problems like pimples.?

The centre follows the
panchakarma (purification) therapy. Explains Ramesh ? Oils are applied externally
to help liquefy toxins , so they can be eliminated more easily. The oils also
nourish the body, because through the skin , they extend to the bones and the
nerve tissues.??

As many as 145
medicated oils prepared from herbs , used in different combinations are used
for a massage depending on the treatment.
Masseurs and masseuses trained in Kerala administer these massages. There are special wooden cots made of
medicinal wood (even 300- year-old-one), craved to match the contours of the human
body, so that one can relax while massge is beong done. Citing the reason for
the increasing popularity of the Kairali massage as a cure Geeta says,??Our
general all-purpose massage , spanning 45minutes once a week, cures stress
and tiredness associated with fast paced life.?? Eminenet regulars include
Amjad Ali Khan, Sonal mangsingh, the ambassadors of laos and Venezuela and
several top industrialists. ? Some well
known surgeons too come here for treatment??, adds Ramesh.

There are separate sections
for men and women. Changing rooms, hot showers and lockers have been provided,
in addition to steam baths to relax nerves and tone up the muscles. Guest rooms
are also available , should one decides to go in for health treatment, one
massage treatment taking up to 14 days.
Double paneling ensures that the centre stays cool. There is no
plastering or painting on the walls made of rough hewn brick. The construction material
used have been brought all the way from Kerala, for example, the terracotta tiles
on the roof. Ramesh comments, ??Even the masons were all from Kerala.?

Membership for Kairali
centre or Club as Ramesh calls it , is on ??first-come first-served?? basis. Annual
memberships which includes 60 massages cost Rs. 7500. A single massage for non- memebers cost
Rs.150.

The Centre?s
popularity has grown through word-of-mouth publicity. Geeta says , ??We are
treating a boy who was paralysed from neck down. His father D.K. Sikdar heard
of us from somebody and came here. Sikdar obviously impressed with the
treatment , says , that, ??now my boy can move his fingers a little bit. I am
hopeful that Ayurveda can eventually cure him completely.??

We claim 100 per cent
success in some cases, nevertheless we cannot perform miracles,?? emphasizes
Ramesh. ??We do our best??. 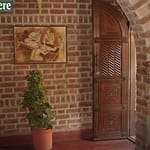