Kairali Stands at No. 6 for the 10 Things India does better
than America !

In a video uploaded in YouTube by Geobeats that showcases 10 things Indians do better than Americans, Kairali stands at number 6. The video shows that India among many other
things is better at Ayurveda than
America. It features ayurvedic therapies of Kairali and an
exclusive interview of MD Gita Ramesh wherein she says that , Ayurveda is a
Indian traditional science that treats the body as a whole and not just the
disease. 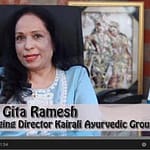 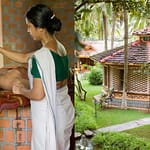