Why Ayurveda | Floating Amid the Coconuts

To a crescendo of cymbals and beating drums, the demon?s facial muscles quiver as he brandishes a sword. Long, silver fingernails protrude from his free hand. His face is painted bright green. As far as classic Indian dance drama goes, it doesn?t get any brighter than kathakali.Actors splash on multicolored make-up and dress in elaborate costumes, such as long, flowing dresses that push out like lampshades and rainbow-colored hats shaped like saucers.I?ve managed to score a front row seat for an evening performance. The stage is small, just big enough for a drummer and cymbal beater, in addition to the two dancers who play the roles of a demon and a princess.
The princess is trying to lure the demon into a trap by seducing him, but the demon sees through her fake advances and chops off her breasts.

Kathakali stories are often about love, and are conveyed using a series of facial expressions and hand movements, or mudras, of which there are 24.

The demon slowly curls and rotates his hands, intermittently raising and lowering certain fingers. This communication is understood by the princess who responds by moving her eyes from side to side and waggling her cheekbones. The actors remain mute throughout.

Getting There:Virgin Australia has return flights to Kochi departing from all major Australian cities. Fares start from around $1400.
When to go:November-March/April are the most comfortable months, as far as temperature and humidity are concerned.

Where to stay:Kairali has 27 luxurious villas, each one named after an Indian zodiac symbol, as well as two Maharaja Suites. Trickling bodies of water run next to each room to create a relaxing atmosphere. The village has everything you?ll need on-site including a swimming pool, a snooker room, a library and a really delicious restaurant www.ayurvedichealingvillage.com

Kathakali originated in Kerala, a land of coconuts (the literal meaning of Kerala) and the Western Ghats mountain range, a biodiversity hotspot with more than 1000 endemic species.

Kerala is India?s most southerly state and its commercial hub is the coastal town of Kochi, which has numerous kathakali venues.Performances last an hour; they were originally written to last the entire evening. I was advised to arrive 45 minutes beforehand and in doing so saw the princess (who is actually a man) scrupulously applying his make-up to the consistent flashing of tourists? cameras.

About 50km north of Kochi is Alleppey; river cruises depart from this bustling town, meandering through coconut tree-fringed backwaters and into an area known as the rice bowl of Kerala.

Alleppey is houseboat central; there are over 1000 of these luxurious floating pads drifting down the river. Guests are pampered with fine food and slow views.

Kayaking is more my thing, so I went on a guided tour through the backwaters. This experience allows you to immerse yourself more fully in the local culture.

In Palakkad, near the Tamil Nadu border, I found Kairali, a village with manicured gardens nestled under coconut and mango trees.
Kairali has a range of treatment programs that combat stress, diabetes, arthritis and many other maladies.
Strict abstinence from smoking and alcohol is part of the detoxification process.

While staying in the village, I received two massages a day. One involved being rubbed with small, rice-filled linen bags cooked in cow?s milk. The long, sweeping strokes felt like I was being licked by giant tongues. It was heavenly and apparently promotes better blood circulation.
During another form of massage called sirodhara, the main challenge was to stay awake as a continuous stream of oil trickled onto my forehead from an urn suspended above the treatment table.

It was the perfect way to end my Kerala foray and ensure that I floated all the way home. 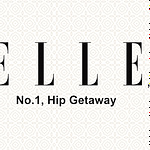 Previous post The Ayurvedic Healing Village is - No. 1 Hip Getaway as per Elle magazine?s February 2012 issue. 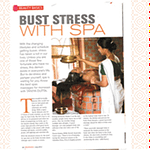