But still, the
question whether Ayurveda is a part of Yoga remains unclear as these ancient
systems continue their migration abroad. A proper answer can only be given by
highlighting the Vedic culture from which both arose, and detailing the
metaphysics of Samkhya philosophy,
which gives the evolutionary background of each. In doing so, it may appear that
Yoga and Ayurveda are in fact much closer than ?sisters?.

Yoga and Ayurveda
in Vedic philosophy.

The historical culture
of the Vedas had a very particular challenge to face. The achievements of early
Upanishadic philosophy ? the identity
of Self and Totality ? as well as the acceptance of intuition as a valid source
of truth, meant that Enlightenment was felt to be a realizable goal. This
exceptional philosophical basis, the source of a wider and more democratic spread
of mysticism than we see in other cultures, had a particular effect on Vedic
society.

It is said that large
numbers of people chose to renounce everyday life and take sannyasa(monkhood) at an early age ?so convinced of the spiritual
path that they completely cast aside any interest in society. Historians
suggest that this overwhelming inclination to a spiritual life was the reason
behind the formation of the Hindu SanatanaDharma,
where practical rules established social responsibilities over the course
of peoples? lifetimes. These rules established that individuals must pass
through four stages in life ? studenthood, public life, seclusion, and finally
renunciation. Parallel to these stages, the four purusartha? the aims of life ? were established as;Dharma ,ethical and religious law;Artha, the pursuit of material wealth;Kama, the pursuit of pleasure; and Moksha, the pursuit of Enlightenment.

The Vedic tradition
includes many separate sciences ? volumes of incredible literature devoted to
architecture, art, medicine and most especially philosophy. With roots in the
indigenous population of India, as well as the later Vedic culture, Ayurveda is
one of these ? a science relating to gross, physical life ? the pursuit of
earthly aims (Artha and Kama). Yoga, on the other hand,
developed as a system of practical tools to train the mind towards the goal of
Enlightenement (Moksha). Though we
may, in a modern context, treat both
Yoga and Ayurveda as systems of health, this was not the case in their original
form. We might even say that issues related to earthly life (such as practical
matters of health) were deemed of a lower value in the Vedic mindset, which
remained firmly aimed towards Enlightenment. It is no surprise therefore, that
Yoga and Ayurveda do not appear together in a scriptural context.

Samkhya Philosophy
– the Basis of Yoga and Ayurveda.

Within the incredible
intellection tradition of the Vedas, a number of theoretical systems formed to
explain how Ultimate Reality evolved to the physical, material world we see
around us. Both Yoga and Ayurveda have the system of Samkhya philosophy, an evolutionary metaphysics, as their basis. Samkhya began as an atheistic and
dualistic philosophy that insisted upon the separation of Consciousness (Purusa) and Matter (Prakriti). The basis of
Reality is pure Consciousness (Purusa),
for which Matter(Prakriti)
proliferates into the material world, as if performing a dance for
Consciousness to witness. Behind this dualism we see the truth acknowledged by
Jean-Paul Sartre and other figures of Western philosophy – that Consciousness
must always be consciousness of something.
This truth requires a dual relationship
separating Spirit and Matter, which is the reason behind all existence inSamkhya philosophy.

Prakriti (Matter), the cause of existence, creates by means of the three gunas ?
Sattva, Rajas and Tamas. Students of Yoga philosophy will
be familiar with these three as qualities or states of mind, translating as peace, passion and inertia, respectively. However, in their primeval form, the three
gunas are evolutionary tools existing as matter
? not qualities but atomic substances.Sattva
is a light translucent substance that evolves into subtle objects: the mind and
the sense organs of the human body, by the action of Rajas, the catalyst. Tames is
a heavy, obscuring substance that evolves into grosser objects, chiefly the
five elements: ether, air, fire, water and
earth.

Yoga, as a system, is
aimed at the mind, and the Sattvice volutes
of the Samkhya system. This was
Patanjali?s original intention, and it is continued throughout the practices of
Hatha Yoga and Tantra yoga. Only by focusing on the mind, can the individual be
brought to a true, clear view of Reality, or unmediated Consciousness.
Ayurveda, however, concentrates on the tamasice
volutes of the Samkhya system ?
namely, the way in which five elements ether,
air, fire, water and earth make
up the human body. Those familiar with Ayurveda will notice that Ayurvedic
diagnosis is called a Prakriti analysis
for this reason ? Ayurveda begins by analyzing the way in which the five
elements make up each particular body. The Ayurvedic doshasare simply extensions of this Samkhya system, combining ether and air (Vatadosha), fire and water (Pitta
dosha), and water and earth (Kaphadosha).

The international
spread of Yoga, already well achieved, presents certain challenges in
redefining its Vedic source. The Western cultural mindset is practically the
opposite of the original Vedic standpoint, and places nearly all its focus on
earthly life, to the sometimes staggering neglect of what may exist beyond the
frontier of material knowledge. It is no surprise, therefore, to see such
emphasis on the physical and ?relaxation? aspects of Yogaasana in many of its Western developments. Nor is there anything necessarily ?wrong?
with this, as Yoga purists sometimes suggest. We can be sure that the core
message of Yoga will withstand all kinds of cultural and historical
interpretations on its journey as a universal form of knowledge.

At an earlier stage of its own migration abroad,
the journey of Ayurveda brings new promises for a constantly developing
understanding of the true meaning of Yoga, as well as the contemplation of material
and spiritual aspects of life. Never before have we been offered a more
comprehensive system with which to create balance ? from the ground upwards. It
is as clear today as in the Vedic times that true progress in life and
spirituality relies on balance ? the sensible consideration of physical health,
and a gradual approach to the development of mental, or spiritual faculties.
Together, Yoga and Ayurveda give us the tools to work within the context of
this material realm and perfect our experience, enabling us to make true spiritual
progress. 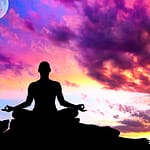 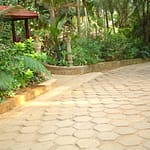