Review of Kairali Ayurvedic Healing
Village and extracts of Gita Ramesh?s interview in The Pioneer

The Pioneer featured a lovely review of The Ayurvedic
Healing Village in Palakkad, Kerala on its 30th November 2014 issue.
The review also had various extract of an interview with Kairali Group?s Joint MD
Gita Ramesh.

The Pioneer is the second oldest and a very reputed English language newspaper in India.

In the Lap of Nature

Sitting behind a heavy desk in her quaint office chamber at the
Kairali Centre in Mehrauli, Gita Ramesh looks like any other businesswoman at
work, not really sporting her achievements on her collar.

Considering that she is one of the few authentic Ayurveda food and
health authors who also leads the highly propagated Kairali group of Ayurveda
treatment centers and spa, Ramesh is a woman of few words and simple modesty.
But you read her books or spend time at the sprawling but well managed Kairali
centre at Palakkad and you will understand the details she and her family have
gone into to give India- and the world- one of its very few authentic Ayurveda
treatment unit.

Though it was in the concrete jungle of New Delhi that she and her
husband KV Ramesh opened the first Kairali unit 25 years ago , it is the
Palakkad that has caught global recognition and powers their ?alternate?
business now. Alternate because it is the passion of Ayurveda and a linage of a
long line of Ayurveda physicians in the family that have been carried forward
by the Rameshs whose primary business is construction.

The 80 something doctor T Chandrashekharan who checks your pulse at
Kairali is a symbol of this well-nourished lineage. He holds your pulse to tell
you candidly that your problem is nothing but eating way too much than your
body requires. ?Why does the population eat so much,? he asks angrily,
obviously not having a permanent antidote to the rising eating epidemic
plaguing the world. It?s quite another matter that he is an expert in treating
the more serious diseases like Multiple Sclorosis which has found no cure in
Allopathy till date. As we talk, there are around seven MS patients seeking
treatment at Kairali.

At Palakkad, as Gita explains,
the effort is to nurture the ancient medicinal science and bring it back
to its full glory, power the local population with jobs, rear Ayurveda doctors
and provide a clean and picturesque environment to not just rejuvenate but also
be treated for more chronic diseases. The no-non-sense massage at the treatment
centre gives you a taste of Gita?s penchant for the authentic. The wafting
aroma of medicinal oils and well trained masseurs may come across as harsh to
your body initially but a sleep later you thank them for their therapeutic
expertise.

Nestling in the middle of the virtual forest with a stream gurgling
across the facility in all its youthfulness, the Kairali resort has an aura
that might be difficult to replicate elsewhere even though Gita is gong ho
about her groups expansion plans which are been taken care by her sons Abishek
and Abhilash. The most recent addition to this chain is a facility at Rishikeh
which overlooks the mighty Ganga.

?Ayurveda is finding acceptance worldwide but there is still a long way
to go. I?ve just come back from a global workshop and I can tell you the
movement has begun to give alternate medicinal strains like Ayurveda their
due,? says Abhilash.

The Kairali brand of Ayurveda medicines are just about finding a market
in Europe and have made it to the grocery store shelves as a food supplement in
US where the FDA is too strict to allowalternate drugs to enter the market.

But the lifestyle strain of Ayurveda has meanwhile, being given a
direction by Gita and her husband whose main clients in Kairali are foreigners
from Europe and America. ? Kairali has
gained a global position by word of mouth and most of our clients return every
year to enjoy the simple living and the rejuvenation program offered at
Palakkad,? Gita who did her BASM in Ayurveda in 1989 tells you.

Indeed, Palakkad is truly a unique tradition to be enjoyed in the lap
of simple luxury, organic vegetarianism and overwhelming Nature. While Gita?s
father-in-law was the man who worked hard and succeeded in transiting the
ancient medicinal science from liquid medication to tablets in 1960s, Gita had
furthermodernizedthe operation by not only providing a deep insight into
healthy Ayurveda foods but also giving the Group an extra edge by bringing into
its committed treatment line a dash of lifestyle, a dash of distress and a dash
of detox.

In the arms of affordable
five-star luxury and undiluted commitment to the tenet of Ayurveda, it is no
surprise that Palakkad?s foreign guest come here willing to do away with
non-veg diets and a promise to return themselves- and spread the word around
about the centre?s efficacies. 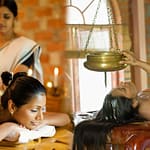 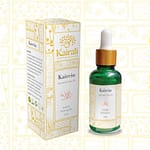